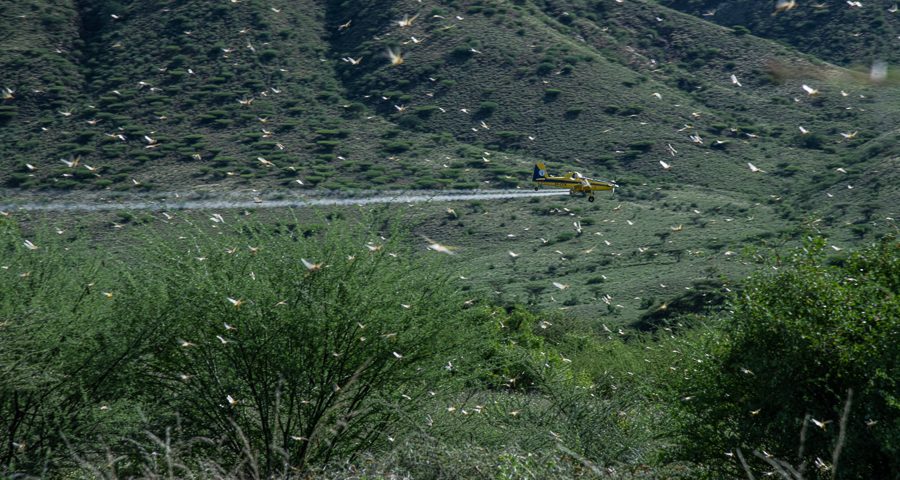 Key Facts on the 2020 Locust Plagues:

Georgina Smith is a photojournalist based in Nairobi, Kenya and recently appeared as a guest speaker at one of the Photojournalism Nights online events. At the event she spoke of the impact climate change induced locust plagues are having on pastoralist communities in the County of Isiolo, Kenya. Having grown up in a rural area of Zambia, Georgina has lived in close proximity to the natural environment herself, which is one of the reasons for her investigating this story. Below Georgina answers my questions regarding the locust plagues and highlights how the local pastoralist communities living on the ‘front lines’ of climate change are suffering human rights abuses.

How is climate change linked to the locust plagues in Kenya?

‘With the story that I was working on for the locust invasion most people are saying there was a climate (change) link. This is because the increased heavy rainfall meant that there was more breading going on in the locus populations, so that combined with some other things meant that there was this huge influx of locusts coming into Kenya from other parts of Africa such as Yemen and Somalia. When they arrived in Kenya last year (2019) it was the worst outbreak for 70 years. Most people had never seen them in that many numbers before, so it was quite a shock for people.’

What was your motivation for investigating this story?

‘I think it was the fact that at the beginning of 2020 and the end of 2019 there were all these news reports coming in about this invasion and that it was the worst one in 70 years. So that was the broad news story, but I really wanted to dig into it and find out who specifically was being affected as I knew in those areas there are pastoralist communities and they are very vulnerable communities anyways. They really are hit by so many different things; the impact of climate change in a normal year, by so many other elements and the weather. They are very close to the environment and so anything that happens they feel the impacts first.

The plagues also have impacts with regards to security and conflict, because once the food runs out for the animals, those herders have to take their animals to different pastures and perhaps trespass on other lands. So I was interested to show how these communities are struggling with those multiple impacts, and this was the time Covid had just hit so that was another thing. There was all these layers of challenges that they were facing.’

Is the locust plague causing food insecurity there?

What type of practices were they putting in place to try and resolve the issue?

‘So they (the communities) were working with FAO the government to try and spray the locust swarms to stop them from spreading. That was the main effort that was happening. Yet, at the beginning of the pandemic there were some issues around the logistics of getting all of the equipment in place. But then as the pandemic went on that was less of an issue. So that was basically how they were trying to control it, and this was in July 2020. So that was the situation at that time.’

You mentioned earlier that the communities were having to trespass on land, did this cause conflict?

‘Well we didn’t see anything, but one of the people we spoke with who was a peace-broker as it were, said that she had worked with the communities to try and resolve conflict so it was definitely tense. But I haven’t seen anything as a result of that yet, but I could be wrong as I wasn’t there to see it.’

Will you be following up with the communities in the future?

‘Yes I think so, I haven’t done anything yet but I hope that it is something I can go back to and revisit as the locust plague is still a big problem at the moment and they didn’t manage to get rid of all of them. They come back once the seasons change so it is this constant cycle. Right now other people are following up with it.’

Is there anything you’d like to add about the communities and the impact this is having on their human rights?

‘I think something to add is that in general the poorest communities are the ones who are dependent on the land and are the ones who face the biggest impacts with regards to climate change. We all see the impact of climate change around the world but it’s the people who are living with the environment, on the front lines, who see these first. I’m sure there are things we can learn from these communities about how we can manage our natural resources and land better so that we don’t make these challenges worse.’