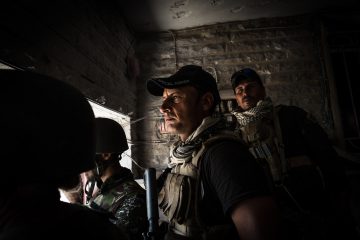 Claire Thomas is a photographer and photojournalist from Wales, UK, currently based between London and New York. Her photojournalism work focuses on issues relating to global political and military conflicts, human rights, and humanitarian and environmental crises. During her extraordinary career, Claire has produced compelling and timely images and has been extensively covering frontlines battles in ISIS in Iraq.

Q. How did you end up going to Iraq?

In December 2016, I decided to travel to Iraq independently with the goal of focusing on stories related to the military offensive to liberate the city of Mosul and the humanitarian crisis of people displaced by ISIS. Before that, I was based in Greece covering the refugee crisis where I met Kurdish and Iraqi families who had been displaced by ISIS. Hearing their stories, I wanted to better understand the horror that was driving people to flee their homes and risk their lives trying to reach the safety of European shores. As there was a lot of media attention on the war against ISIS in Mosul at the time, I decided to head to Erbil, the capital of the Kurdistan region of Iraq, and an entry point to Mosul.

Q. How long were you there for in total? Will you go back?

My first visit to Iraq was for just 2 weeks, but I returned a few weeks later and ended up living in northern Iraq for two and a half years. I’ve been back for a few short trips since I left in June last year, and I hope to return later this year or next year. Erbil was my home for a long time, and I became very fond of the place and the people, so I think I’ll always go back whenever the opportunity arises. There’s certainly no shortage of stories to cover in the country, and I’m particularly interested to follow the progress of rebuilding the city of Mosul, which was heavily bombed during the battle against ISIS.

Q. This is very traumatic work, what do you do to decompress after a trip like this? How do you look after your mental health while working?

I was lucky to have a great support network in Iraq, among other photographers and journalists, the medics I embedded with in Mosul, and also local friends and fixers. My way of decompressing is simply to talk about the situation, which helps me process my own thoughts and feelings, and I was glad that I had a lot of people I could talk to in Iraq.

I think it’s important to be aware of the emotional impact of doing this kind of work, and also to keep in mind that, as outsiders, it’s our choice to be there and we’re extremely lucky to be able to leave the war zone and go back to the safety of our homes at any time.

Of course, being confronted by violence and death is challenging and disturbing, and even more so is seeing people suffering the terror, pain and loss of war. The images that stick in my mind are of mothers crying over the bodies of their children, of soldiers wailing uncontrollably over a fallen comrade, of proud fathers broken by the loss of their loved ones, and the tearless look of shock on the faces of traumatised children. However, I try to focus my thoughts and energy on the incredible strength and resilience of the survivors and the people who helped them survive.

Q. I’m new to photojournalism – self teaching at the moment. How did you get started and did you go through formal means? And how did you get to work in Iraq? Did you pitch to someone as an independent? Would be great to know how it all works.

I’m also self-taught with no formal training in photojournalism. I studied Politics at University, and after I graduated I spent several years travelling and working overseas. During that time, I developed my interest and skills in photography, and eventually started doing some freelance photography work for my local newspaper in Wales. After a few assignments in Wales I travelled to Palestine where I began producing photo essays about life in the occupied West Bank, which I pitched to several mainstream media outlets.

As a freelancer, I really appreciate having the flexibility and freedom to choose which countries I work in and which stories I cover. Of course, that flexibility comes with the necessity for extreme self-motivation, self-discipline and organisation, as well as the financial burden of paying our own expenses in the hope of selling the work afterwards.

My decision to go to Iraq was one I made independently – I wasn’t sent there by any media outlet. Once I arrived in Erbil, I spoke with a lot of other journalists and fixers to better understand the context and get an idea of stories I could cover that weren’t as widely covered as the military operation in Mosul. In the beginning, I captured the content needed for the story I wanted to cover – photos and interviews – and then sent a pitch with a small sample of images to media outlets. Once editors got to know me and my work, I started to get more commissioned assignments, often working alongside a writer.

It took me a long time to understand how the industry works for freelancers. For me, the most difficult part about being a freelance photojournalist is not the photography or journalism work itself but finding ways to get the attention of editors and my work published. I’m still learning myself, and the best advice I can give is to be persistent and determined, and get to know the publications you want to contribute to.