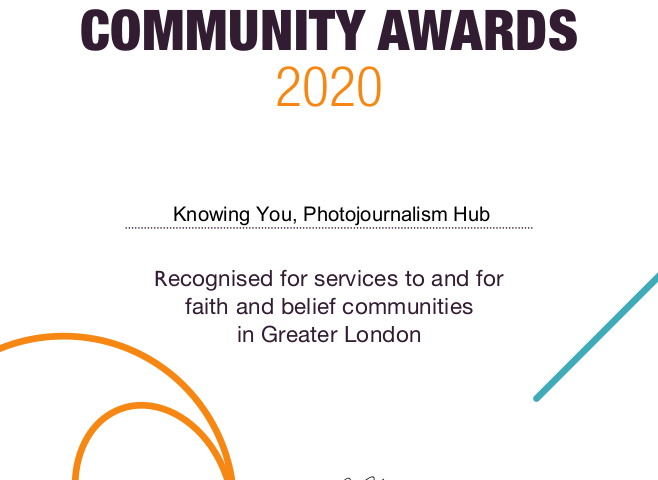 The Photojournalism Hub Knowing You project has received a Recognised award from the London Faith & Belief Community Award!

I would like to express my thanks to everyone for their Nomination, the wonderful participants, the charity Near Neighbours, the London Faith & Belief and Her Majesty’s Lord Lieutenant of Greater London’s Council on Faith.
It is an honour that the Photojournalism Hub’s Knowing You project will be receiving a Certificate of Recognition from the Faith and Belief Forum and Her Majesty’s Lord-Lieutenant of Greater London’s Council on Faith on the 30th November at The Royal Society of Medicine.

The Knowing You project is among the 40 selected projects ‘deemed exceptional’ by this year’ judges and the Faith & Belief Forum that have provided support, respite and are working to make London a city that is inclusive to everyone and continuing to do so despite the challenges posed by the current pandemic.

It has been a wonderful experience to engage with women of different faiths and backgrounds living in White City with the Knowing You photography project to inspire bonding and community cohesion whilst providing visual narrative and photojournalism teaching. The project supports participants to bond one another, promoting respect and acceptance and aims to dispel prejudice and barriers of ethnic, religious and racial discrimination by encouraging participants to get to know a fellow participant through developing a photo story of each other. The project has culminated in the production of a photo book, which will be soon shared to the wider public containing wonderful visual stories and testimonies of the powerful human connections. The project has been kindly supported by the charity Near Neighbours.